This article is #19 of a weekly series highlighting the former memes of Bureaucrash, an organization once headed by my friends Pete Eyre and Jason Talley of the Motorhome Diaries. The memes were originally authored by Pete Eyre and Anja Hartleb-Parson, and were intended as means of communicating ideas about liberty in catchy and succinct ways. 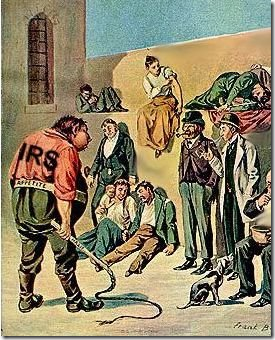 According to the Tax Foundation, Americans will spend about 30 percent of their income on taxes in 2008. For comparison, in 1900, it was around 6 percent. Put differently, for almost four months out of the year you work just to pay for government. In the current system most types of income are taxed, sometimes twice, and often progressively. These are just some of the taxes levied by government: federal and local income tax, sales tax, property tax, gasoline tax, cigarette tax, liquor tax, vehicle sales tax, utility tax, marriage license tax, inheritance tax, and capital gains tax, etc. On top of that, you pay to compensate for taxes levied on others. For instance, you, as a consumer, pay higher prices for goods and services because of the corporate income tax levied on businesses. The government, if it is to exist, should protect people from force and fraud. Therefore, at most, government should tax only to maintain a national defense, a police force and law courts. But instead, legislators seek to fulfill the so-called “needs” of the constituencies and special interest groups that put and keep them in office. So, the government has tasked itself with providing cheaper prescription drugs for seniors, improving education for children, supporting for farmers by keeping food prices high and paying them for any product they fail to sell, covering the living expenses of the poor, paying for medical research, and so on. The result is not a system that protects our individual rights but a system that provides benefits to some at the expense of others. Typically there will be concentrated benefits and dispersed costs, which makes organizing resistance difficult and leads to even larger government interference.

Taxes violate individual rights. Specifically, it violates your property rights. By using taxation to benefit some people, the government says that you have no right to keep what you have earned or how you spend it, as long as there is someone else who needs or wants it, and that it, the government, has the right to seize your property in order to provide it to the person or group they see fit. That’s damn close to making you a slave. As John A. Pugsley stated, “How does the IRS agent who collects our taxes differ from the gunman? He does not. You are forced to pay under threat of imprisonment (the gun). Your money is taken without your voluntary consent. It is used by other people who claim that their need is a just demand of your property. The process is justified because a group of people (voters) decide as a group that you should be robbed and that the money should be used for whatever purposes they deem proper.”

The current tax system creates winners and losers. The government does not create wealth, but only usurps and redistributes it. The winners in this redistribution are legislators and the special interest groups that pander to them. Also, foreign producers win because the taxes levied on businesses increase prices on domestic goods. Tax accountants win because they garner more business due to the complicated the tax codes. And, people who are the least productive win because their income tax is lowest; some do not have to pay income tax at all. The losers are clearly productive individuals, those who have created wealth by providing goods and services to others, who have chosen to voluntarily patron their business. But more than that, everyone who pays income tax loses because they have to spend time and money to complete complicated income tax returns. As Mark Skousen penned: “Oliver Wendell Holmes once said, ‘Taxation is the price we pay for civilization.’ But isn’t the opposite really the case? Taxation is the price we pay for failing to build a civilized society. The higher the tax level, the greater the failure. A centrally planned and totalitarian state represents a complete defeat for the civilized world, while a totally voluntary society represents its ultimate success.” Taxes trample the idea of virtue. Forcing individuals via taxation to pay for the “needs” of others (often determined by a bureaucrat) does make them benevolent or charitable. What makes people charitable and benevolent is realizing that there are persons in true need and causes well worth while contributing to. Many people do realize this, which is why they give voluntarily. Moreover, excessive taxation discourages charitable giving because people have less money to give, or figure that their taxes already pay for helping the needy.

Taxation is frequently “progressive.” That means that individuals who earn more are forced to pay more. But why? They do not derive any greater benefit from the government by doing so. The underlying assumption of progressive taxation is that wealth is a like a fixed pie from which some people get to take a larger piece, thereby decreasing the share of others. Accordingly, income inequality is the expression of unfair wealth distribution and should be decreased by reallocation from the top to the bottom. Hence, those who make more should pay more because they have to give back in some way what they have taken from others. This depiction of the economy is inaccurate. More production generates more economic progress which leads to an increase in wealth for everyone (at least in a free market system), so that the pie does not remain a fixed size.