The Exorcism of Collectivism 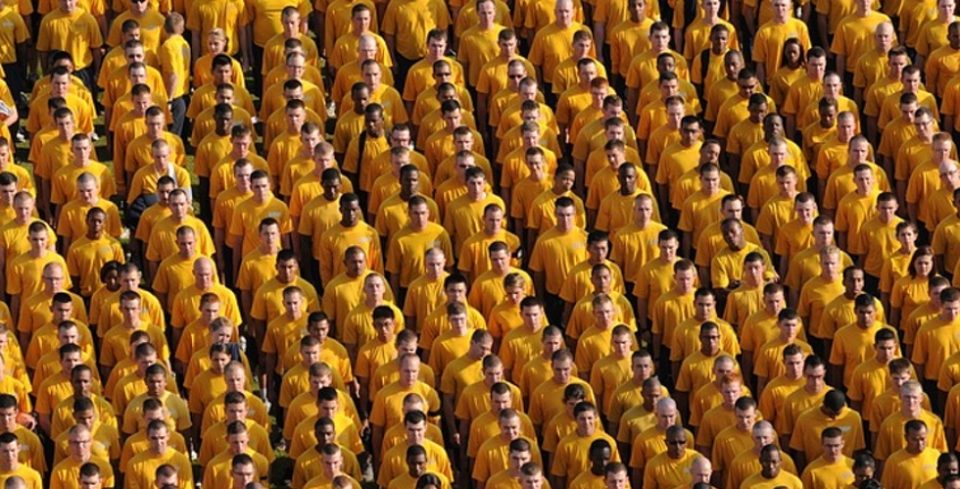 Have you ever found yourself living out an expected role scripted by those around you? Whether it’s a family member, partner, social clique, work rival, or boss, we have a tendency to subsume other people’s scripts for us if reinforced by expectations long enough.

You dress very finely and people call you a snob so you begin to perform like one. If enough voices box you into performing a perceived role, you tend to adopt some of its ways.

The drug addict, if told enough times and set up to play the role of the anti-social screw-up, will often become as such.

The type-A businessperson finds himself becoming cold, greedy, and slippery as people’s vocal and nonverbal perceptions of his role subconsciously influence the way he acts out his persona.

These great (or grating) expectations can cause burdensome conflict and bitterness in our lives, particularly at the cultural-political level. People tend to move in groupthink. That’s the norm, the baseline modus operandi of our species. The groups we form tend to give us a sense of transcendence—that is, a feeling of being able to become something bigger than ourselves—as we adopt the same thought patterns, angers, passions, hates, rituals, rhetoric, and enemies of a common body. Acting as groups—whether it’s Marxism, racial identity, or a libertarian sect—has a way of giving us a peace and order and mission in life. It’s our “old time religion,” you can say. After all, “religion” comes from the root Latin term “to bind together.”

Culture, be it a nation or a drinking buddy clique, is the way we act out our religion, our “binding” together. Our group cultures never find such ecstasy as when we find a person—usually someone who doesn’t perform a script we approve for them—to expel or wage war against. Expelling a misfit, stubborn devil’s advocate, or ideological turncoat rallies and unifies our passion-driven shared beliefs and acts to the point where we become as one body eliminating the toxin for our health.

Our culture creates violent, self-fulfilling systemic purging. Desensitized sex workers, greedy tax evaders, and drug pushing gunslingers don’t just pop up in a vacuum. They are symptoms of cycles of collectivist group purges. Yes, they are ultimately responsible for the actions they take, make no mistake, but when we treat people as “Other” we create the monsters for which we were looking.

We need those monsters.

The cold-eyed prostitute is out there so that we are here, nowhere near her lot in life. The gun-trading dealer is who he is so we can measure our own socially-approved markers of respectability against his contrast. I’m exploitative, but not like him. The billionaire finds more and more cunning ways to shelter his money and game our culture’s tax and regulation system so we can feel comparatively honest, selfless team-players.

Where do we learn our collective cultural values? From the stories we tell. That’s what education and mass media and art provide: stories that reinforce collectivism as the way of the world; we should pick a side, play by the rules of the game, and battle for supremacy over other rival groups. Forever, apparently.

Nightly news reports of another successful drug bust in a rejected part of town are supposed to remind us: play by the rules our collective has designed or else you will receive violence and expulsion. You will become an Other.

There’s a bug in the script, though. A counter-cultural force has emerged in history that produces counter-stories that are slowly eroding our dominant collectivist notions of the world. These stories leave their fingerprints on our social norms and desires regardless of our awareness of them and regardless of how collectivist groups fraudulently misappropriate them for their own violent campaigns. These stories are good news for all misfits, indeed, all persons looking for the courage to reject the lie of the crowd that is collectivism.

I call it the personhood revolution and its founder is Jesus of Nazareth.

Beyond just rhetoric, Jesus performed his aesthetic of personhood. He created a subversive viral bug in our old collectivist system that reversed the mainstream script: when your group is threatened or stressed, find a common enemy and expel him. Blame him. Dehumanize her. Kill it.

In the new script Jesus invited all of us to perform, he first openly admits that he’s a total imitator himself. He doesn’t set himself up as the originator of anything but points all of his ideas back to his dad, God. He then asks listeners to imitate his imitation of God—one of mercy, not sacrifice—thereby finding transcendence outside of our collectivist violent purging.

In this performative context, the eyewitness accounts of Jesus’ mission are freshly astonishing. One such example is the story of the Demoniac of Gerasa. A literary analysis shows us the breakthrough taking place in the narrative. Whether every element is literal or not is beyond the scope of this discussion. What’s in view for our literary analysis is what the narrative is doing symbolically to its audience—steeped even more than we are in a culture in which collectivist violence was sacred.

Jesus travels across the Sea of Tiberius to the Roman pagan city of Gerasa. Immediately, he is confronted with a possessed man. The howler lives among the tombs away from polite society. When he’s not moaning, he neurotically stones himself. Apparently, this community has other-ized him so well that he performs the script of a dehumanized monster on his own. They don’t even need to lift a pebble to do the work for him.

Jesus asks him what his name is. He replies enigmatically, “Legion, for we are many.” A Roman legion was the greatest symbol of power of the Roman collective body. It was the vessel by which the empire owned outposts like Jesus’ own country.

And a legion was many, anywhere from 3000-5000 soldiers made up a unit. The Latin word legio was used to refer to a large group of people. It also meant “a chosen body.” The demoniac is the one chosen body and the many at the same time. There’s a double entendre taking place in the narrative. Philosophers call this the one-and-the-many paradox: the logic of humanity.

The man’s Many voices beg Jesus not to expel them out of the land. So Jesus sends them into a herd of pigs—the livestock of the community—who collectively throw themselves in the sea as one. In Jewish literature, the sea is always symbolically associated with chaos. In this text, we have the world’s first exorcism of a crowd out of a person. In other words, we have a performance in which the narrative does not reinforce the mainstream narrative of collective bodies assuming possession of persons to reinforce their shared virtue against a villain. Rather, we have a misfit reject being exorcised of the collectivist voices in his head. These voices are given a proper home, a herd of creatures less than human who mindlessly imitate their own destruction by drowning in the sea—again, a literary device for chaos.

Left without their chosen scapegoat, the many—the crowd’s voice that consumed the man to ostracize himself among corpses and perpetually stone himself—is symbolically unmasked by the narrative to reveal what the Gospel authors see as its future culturally perceived place in Jesus’ project: animalistic herds driven to self-destructive chaos.

Instead of Jesus helping the crowd eliminate its common enemy, he frees the person of the possession of the crowd. The collective script no longer holds him in chains. Clothed and in his right mind, the man—purged of the collectivist script possessing his being—can no longer provide his town with the catharsis and group normalcy yardstick on which they relied. As such, the collective is terrified. They beg Jesus to leave at once. Their magic antidote for peace, order, and a shared sense of well-being has been stolen. The man, restored of his sense of self, asks Jesus to let him join him. Jesus tells him to stay and teach his town the way of mercy he had demonstrated to him.

We must continue to enact this counter-story today. Our neighbors are robbed of their humanity by a society that grinds them down into scripted molds that rob them of their vibrant, dignified personhood. We cast our misfits into human cages like animals. We allow them to “stone themselves” as they self-medicate with destructive drugs to cope with the social alienation. We cheapen and commodify sex every day in every aspect of popular culture and then cast sex workers and their loser clients into the living tombs of prison. We provoke our neighbors to cling more selfishly to hyper-competitiveness and greed in the marketplace by creating ever more labyrinthine, lifeless rites of passage we call regulations they must hurdle lest we steal their money through fines or cast them into cages.

We do all of this, of course, in the new mantra of victims. Personhood-robbing, innovation-killing laws are covered up with narratives with which we pacify our cognitive dissonance: yes, we’ll send armed agents to use deadly force to raid a raw milk farmer, but we do it because of the potential victims he might create. Our age-old collectivist violence, fatally infected by the virus of personhood for over two millenia, must find clever ways to sneak back in faux-imitation of Jesus’ counter-narrative’s defense of victims and misfits, those most prone to receive collectivist violence. We need the FDA’s criminalization of nonviolent acts lest the wild west of personhood-respecting voluntary exchange and innovation allow persons to become victims of fraudsters and pranksters.

No, actually, we don’t. Protection against fraud will always be a feature compatible with a voluntary order of free persons. It’s a self-defense mechanism that protects victims from actual violence rather than some imagined future chaos that justifies preemptive aggression.

It is collectivist violence and its possession of our minds we must exorcise. We must cast out the accusing, belittling, abusive voice of the Many that owns the minds of our modern chosen maniacs, our necessary victims. Our path is personal service and mercy, not collective violence. Be it.