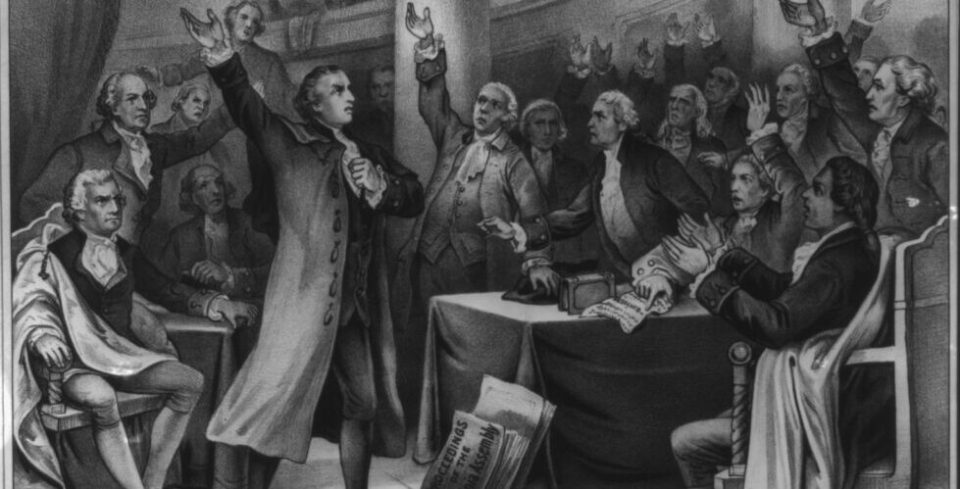 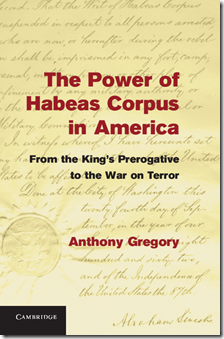 Review of The Power of Habeas Corpus in America: From the King’s Prerogative to the War on Terror by Anthony Gregory. Cambridge University Press and the Independent Institute, 2013.

Anthony Gregory is a great friend of mine, and I am honored to have the opportunity to review briefly his splendid new book, Habeas Corpus in America.

A few comments about the book itself are in order before sojourning through the content. First, it is a beautiful volume. I suppose we can thank Cambridge University Press for that. The cover itself contains the text of Abraham Lincoln’s order to suspend habeas during the Civil War – a very nice visual touch. The forward is written by the erudite constitutional scholar Kevin Gutzman. The book is written in three parts: history of habeas corpus, application of habeas corpus after 9/11, and a section titled “Custody and Liberty” exploring the future of habeas. Multiple appendices then analyze various habeas cases, and the customary selected bibliography and historical term explanations follow. It is long, thorough, sweeping, and powerful – but also pretty expensive. I suppose we can thank Cambridge University Press for that as well.

Habeas corpus is generally understood as the legal right not to be detained arbitrarily by the government. It is considered a foundational principle of Western legal systems, even of natural law itself. Still, habeas corpus is widely misunderstood, especially on a historical level. Anthony Gregory’s work on the history of habeas corpus and its application in America levels a damning charge against the American federal government and challenges the reader to reconsider the common assumption that the federal government protects liberty by showing how and why they abridge this fundamental right.

In the history section, Gregory explains that the origins of habeas corpus are not as simple as we are generally taught. Writs had traditionally been used by governments to command obedience. Contra the oft-assumed pure libertarian origins of the writ of habeas corpus, habeas was initially a privilege of the nobility in England. The Magna Carta itself was pushed upon King John by the Barons of Runnymede for their own personal protection. Expanding the writ to all citizenry took considerable time, and highlights the mixed and often paradoxical history of habeas in the West.

Not only did habeas radicalize the colonists; the colonists soon radicalized habeas, extracted from it the purest pro-liberty element at the core of the judicial writ, and adopted through practice a libertarian version of the writ that prevailed in the late colonial era up until the adoption of the U.S. Constitution. First the colonists had to claim the writ as their own, which happened not so much through inheritance from Britain but with indifference or even hostility toward formal English institutions.

Compared to most other habeas corpus episodes, the initial expansion of habeas in America was a bottom-up affair. Nevertheless, over time the federal government acquired the means to do with habeas whatever they willed. Indeed, built into the Constitution itself is a mechanism to destroy habeas: “The Privilege of the Writ of Habeas corpus shall not be suspended, unless when in Cases of Rebellion or Invasion the public Safety may require it.” (Article I, Section 9) During the debates on adoption of the Constitution, anti-federalists decried this language as unduly granting power to the federal apparatus, since it alone would hold the power to determine when someone was acting in “rebellion” and that “public safety” required suspension of habeas. The clause also highlights that this power is a government privilege. In other words, you do not have a right not to be detained arbitrarily, but rather this is something you get from the government. What the government gives, of course, it can also take away. Thus we see that habeas corpus as a government power throws us into a paradox: Can the government be expected to wield such power justly when it alone has the power to rule when it is a party to the case?

Indeed, multiple incidents through America’s history shows that at no time has the federal government been incapable of justifying suspension of habeas when their plans require it. Whether the military commissions of Abraham Lincoln, the detention of Japanese-Americans in World War 2, or the indefinite detentions of the Bush-Obama era, where the feds have will they will make up a way.

Again, the American experience suggests that the history of habeas corpus is complicated and somewhat contradictory given its importance both in our shared cultural tradition and in concrete reality. Habeas corpus is both overvalued and undervalued, sometimes for right reasons and sometimes for wrong reasons. Fundamentally, the principle stands but this society must change if habeas abuses are to be righted. To Gregory, the end-game solution is simple: “A society needs more than the judicial order to secure its freedom. It needs to value that freedom in itself.” Understanding the history and application of habeas corpus is only part of the solution, the next is to change the culture from the inside.

Anthony Gregory’s excellent book pushes the truth about habeas corpus and the atrocities of governments forward. I am confident that any student of legal history and of freedom philosophy will find his work very beneficial.

Purchase Anthony Gregory’s Habeas Corpus in America or any item at Amazon.com through an LCC link and LCC will receive a small commission as a result. Thank you for supporting LibertarianChristians.com!

Note: This book is a bit pricey, so if you do not think you will purchase it, encourage your local library to check it out to spread Anthony’s great work!