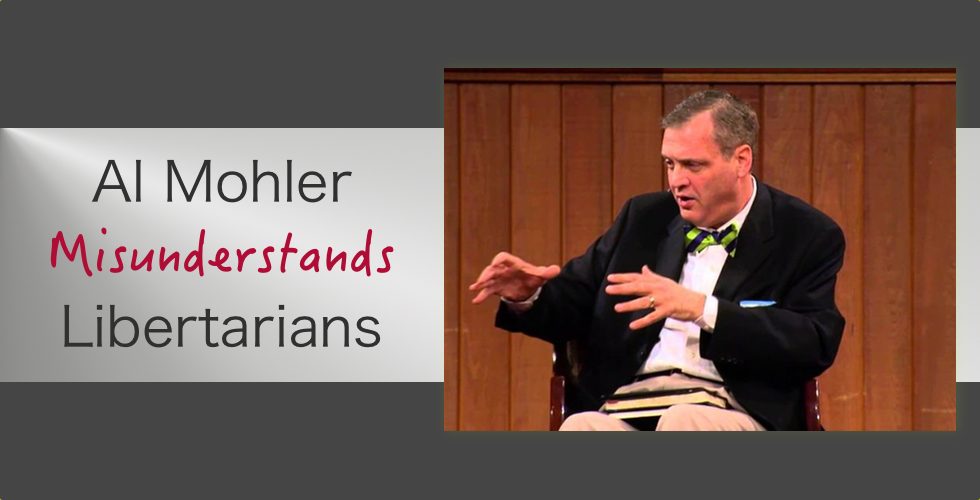 This article is by CJay Engel and originally appeared at The Reformed Libertarian.

A reader of this site called my attention to a “Wretched” episode in which Al Mohler discusses the trend among Christians to accept and be attracted to libertarianism.  The link that was provided to me was here.

Mohler has spoken out against libertarianism in the past and is clearly not a fan.  But the discussion on the video provided a great opportunity to share some thoughts about Mohler’s understanding and dismissal of libertarianism.  I like Al Mohler on many things (not everything).  He has done great things for the Southern Baptist Convention and for the recent growth of the Evangelical acceptance of Calvinism.  Moreover, he has stayed strong on key cultural issues, proclaiming the truth of the Bible over against the modern relativist and subjectivist ethical trends.  He is a good guy. I disagree with his analysis of libertarianism though.

Pointing this out is important because it challenges the underlying assumption that libertarianism as a political theory is best represented by those libertarians who have the most political impact.  It is easy to attempt to determine libertarian doctrine by looking up the Libertarian Party platform, but unfortunately, this does not reveal the whole story.  The Party Platform included statements on individual sovereignty, controlling behavior, drugs, abortion, and gay marriage.  But the Party Platform is not the best resource for understanding libertarianism.  To say that libertarians support abortion is false. Some do, yes.  But to this libertarian, and many others including Tom Woods, Ron Paul, and Laurence Vance, libertarianism, which includes the belief that no one can murder, contradicts abortion.  One can even, if they wish, consider this my number 1 problem with the Libertarian Party.  As for gay “marriage,” the paleo-libertarian position is that the State should not seek to (re)define marriage.  Moreover, since it would actually grow the State’s responsibilities to approve and oversee gay marriages, it is my contention that the State should not pursue this liberal and politicized doctrine at all.

At any rate, we should move forward to Mohler’s specific concerns as portrayed in his answer.  He states quite emphatically that Christians should not support libertarianism.  He cites two reasons that young Christians are attracted to it.  The first is that it gives them a way out of the cultural collision.  I don’t think that it gives Christians a way out of anything.  And frankly, it doesn’t claim to.  The cultural battles of our time go far beyond questions of the proper role of government in society.  Government or no government, totalitarianism or constitutional republicanism, the disagreements over appropriate lifestyles will live on.  However, Mohler gives as his second reason the ideological base, which, interestingly, is an alleged idolatry.  This is a curious statement primarily because I have taken much time over the years of running this site to point out that the State itself is the greatest idol of our time.  Not only does it act like, and portray itself to be, the god of our time, but it is often thought of as the solution to a great many problems, even among conservatives!

In order to back-up his statement about idolatry, he says that libertarianism “is” Ayn Rand and Randian individualism.  Now, that is surely the case for Randians, but what about those many of us –both Christians and secularists — who are not at all fans of Ayn Rand?  Does his statement apply to us?  He even moves forward to say that those who adhere to Randian ethics are denying the gospel.  We Christians must agree with him here! Unfortunately, this is not a statement against libertarianism; only against Randianism.  There is quite simply nothing to respond to, except to say that it is non applicable for those libertarians who are not followers of Ayn Rand.  For those that are interested in individualism from a Christian perspective, I have given some thoughts here.

Now, we get even deeper into libertarian theory towards the end when Mohler is disappointed in libertarians on the basis that they reject the idea of legislating morality.  He says that all legislation is moral in nature.  This is entirely true.  But this is not what legislating morality means.  To legislate morality is to enforce the moral law of God upon threat of coercion.

But we do not reject the necessity for the respect of God’s laws. We certainly agree with J. Gresham Machen when he writes:

If we want to restore respect for human laws, we shall have to get rid of this notion that judges and juries exist only for the utilitarian purpose of the protection of society, and shall have to restore the notion that they exist for the purposes of justice.  They are only very imperfect exponents of justice, it is true.  There are vase departments of life with which they should have nothing whatever to do.  They are exceeding their God-given function when they seek to enforce inward purity or purity of the individual life, since theirs is the business only of enforcing –and that in necessarily imperfect fashion — that part of righteousness which concerns the relations between man and man.

The fact is that libertarianism is not and does not pretend to be a complete moral, or aesthetic theory; it is only a political theory, that is, the important subset of moral theory that deals with the proper role of violence in social life. Political theory deals with what is proper or improper for government to do….

Moreover, in Murray Rothbard’s essay which sought to answer the question “Why Be Libertarian?” his answer, simply, was justice.  Justice is a moral concept.  Perhaps Rothbard failed in his refusal to accept the Christian source of justice as Machen did.  Regardless, we agree with Mohler that all laws refer to morality.  What is being debated, then, is not the presence of morality, but the extent to which morality is legislated.  We agree that murder is forbidden.  We also (presumably) agree that lying to one’s neighbor is not to be given consequence by the State.  Thus, we both make choices as to what ought to be legal and what should be illegal.  The only difference is that I have a hard and fast rubric by which to determine which of moral laws should be punished in civil society.  My rubric is this: if it breaches an individuals God-given right to life or property, punishment ought to be applied.  I agree with Rothbard when he writes:

“For it should never be forgotten that a libertarian society does not mean the total absence of coercion but only the absence of coercion against noncriminals. Those who invade the rights of others by violence deserve their proper check and punishment by the force of law.”

In the end, my concern for Mohler, and so many other well-intentioned Christian leaders, is that they misunderstand libertarianism.  They are not to be given too much grief for this I suppose.  For 85% of self-described libertarians misunderstand it as well.  I only hope that more and more Christians, even if they refuse to become libertarians, would understand the variances and nuances in the libertarian world.  I, for one, accept that I am way deep in the minority, both in my definition and application.  The following summary of Hans-Hermann Hoppe’s thesis on contemporary misunderstanding of libertarianism applies here.  It is taken from my article which can be read here.

Beyond this, Hoppe points out that conservatism (which tends to be “empiricistic, sociological, and descriptive”) focuses on “families, authority, communities, and social ranks while libertarianism (which is “rationalistic, philosophical, logical, and constructivist”) focuses on the “concepts of property, production, exchange, and contract.”  And therefore the former is the “concretization” of the latter.  Conservatism needs a theory and libertarianism has practical expressions –that is, a natural and physical order.  If conservatism desires to return to a “moral and cultural normalcy,” it needs libertarianism’s consistent and defensible antistatism.

Why then is “much of modern libertarianism… culturally leftist?”  It is not due to “any such leanings among the major libertarian theoreticians,” says Hoppe.  ”Rather, it was a result of a superficial understanding go the libertarian doctrine by many of its fans and followers.”  This is important, and it is something I mention on occasion.  But Hoppe adds something even more profound.  He states quite emphatically that the tendency to misunderstand and misapply libertarian doctrine is “inherent in the social-democratic welfare state, of promoting a process of intellectual and emotional infantilization (recivilization of society).”  Because of democracy’s emphasis on “majority vote” and “popular demand,” democracy actually works against the very idea of a principle that is applicable to all people at all times.  The masses of this generation, growing up in a society where “democracy” is screamed at them from all sides, are inculcated to assume that ethics and culture is relative, subjective, and conventional.

Many doubt that Christians can be libertarians. I would hope that we can agree to a definition of libertarianism before we proceed with a discussion.