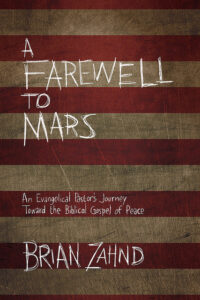 Brian Zahnd is the founder and lead pastor at Word of Life Church in St. Joseph, Missouri. He is the author of several books, most recently A Farewell to Mars (review here), where he recounts his journey to the gospel of peace after many years of marching to the drumbeats of war. His journey will resonate with libertarians who are disenchanted with the state of political affairs in the United States, as well as with many Christians who hunger for a gospel that speaks to human social needs.

Zahnd agreed to discuss the themes of his new book with somebody who has a libertarian Christian audience in mind. My questions were shaped in part by my desire to connect the core issues that matter to me as a libertarian – primarily violence and peace – with my belief that the gospel of Jesus will change human society. I do not assume or expect Zahnd to agree with libertarians on politics, but I do believe our views overlap enough to have a unique conversation. I have also tried to avoid questions he has already answered in the book.

Brian,
Thank you for being willing to discuss with me the themes in your new book. As I was reading it, I knew it would resonate with my fellow libertarians. We have a reputation of being contrarians, especially in politics! Many of us are strongly anti-war. The non-aggression principle is foundational to our political beliefs. We strongly affirm Lord Acton’s famous quote on the corruption of absolute power. It is no surprise that anyone who teaches that Jesus spoke against empire ends up on our radar!

DS: On this issue of peace and violence, what criticisms have you experienced? What do you believe your critics are missing most about the message of Jesus? How has their critique affected the way you understand and communicate this message?

BZ: First of all, Doug, thank you for the opportunity to engage with your audience.

We tend to divide the subject of violence into two categories: individual/criminal violence and corporate/civil violence. If I speak of the problem of violence on the level of the individual — street violence, domestic violence, criminal violence — I receive no criticism at all. But if I call into question the organized mass violence of war, I have to brace myself for withering criticism. The violence of war is sacred violence. It’s hallowed in anthem, memorial, monument, and myth. The massive violence of war is sacred because it has been the organizing principle of civilization. This is the story that history (and the Bible) tells us. This is the foundational story of Cain and Abel. Cain re-imagined his brother as a rival and enemy. So Cain killed Abel. Then Cain lied to God and himself about what he had done, moved east of Eden, and founded the first city. This is how the Bible tells the story of the rise of human civilization as we build upon a foundation of collective murder. Over the course of six millennia human civilization has clung to power enforced by violence as our organizing principle, and most people find it nearly impossible to imagine the world any other way.

In speaking on the subject of violence it’s important to keep in mind that I’m exclusively addressing those who identify themselves as followers of Jesus. The views I hold on the possibility of nonviolence are not “self-evident” — to use Jefferson’s Enlightenment term. These views are only intelligible if God validated and vindicated Jesus Christ by raising him from the dead. What I think my Christian critics have missed most of all is that Jesus’ message was not about how to get into heaven when we die, but how to bring the government (kingdom) of God into the world here and now. But rethinking how we arrange the world is such a radical undertaking that it needs to be told somewhat slant so that it can dawn on people slowly. This is why Jesus spoke in parables — not to “illustrate his point,” but to keep his message from being too pointed too quickly. In challenging violence as our organizing principle I’m reminded of what Emily Dickinson said,

DS: In order to avoid claiming Jesus would endorse a particular political party or policy, many Christians make the claim that Jesus wasn’t political. They quote Jesus when he said, “My kingdom is not of this world.” Why is it so difficult to convince Christians that the message of Jesus is as much for our social ordering as it is for our personal lives?

BZ: The irony is that Jesus message was intensely political. But it was not then and is not now an endorsement of any of the existing politics of power. Jesus cannot be enlisted to endorse our own preferred version of politics for the simple reason that he has his own politics. Jesus calls his politics “the kingdom of God/heaven.” When Jesus says, “my kingdom is not of this world,” he is explaining to the Roman governor Pontius Pilate that his kingdom is not from the system of violent of power, the system of Caesar. The kingdom of Christ is for this world, but it is not from the world as we have known it. The kingdom of Christ is without coercion. As Christians we persuade by love, witness, Spirit, reason, rhetoric, and if need be, by martyrdom, but never by force. Yet we are deeply invested in our politics of power — especially if the present arrangement has us situated somewhere near the top. So instead of making the radical decision to live as if Jesus is actually Lord of the nations, we relegate him to Secretary of Afterlife Affairs. It’s a clever move, but it completely obscures the political message of Jesus.

DS: Violence as the “organizing principle of civilization” is an unfamiliar theme to many Christians. It could very easily be misunderstood. You elaborate on this in your book, but where should readers look for more information after they finish yours? What author(s) or book titles have you appreciated most along your journey toward peace?

BZ: I’ve been very influenced by John Howard Yoder and René Girard. Yoder’s landmark book is The Politics of Jesus and I highly recommend it. I suppose the place to start with René Girard is either The Girard Reader or I See Satan Fall Like Lightning. But these books are written for a primarily academic audience. A more accessible book might beResident Aliens by Stanley Hauerwas and Will Willimon.

Read part 2 of this exclusive interview with Brian Zahnd.

PrevPrevA Farewell to Mars
NextInterview with Brian Zahnd – Part 2Next